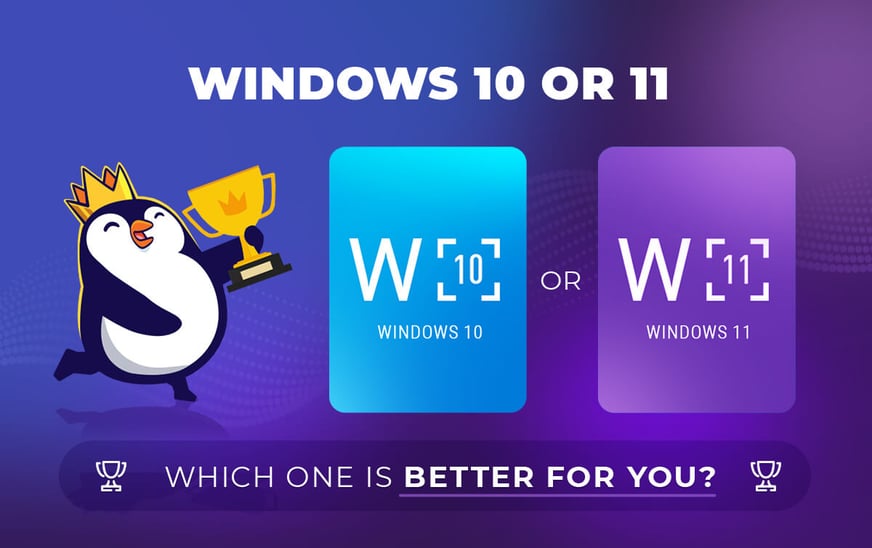 With Kinguins’ long experience in gaming and software sales on Windows related products, here’s a few comparisons between Windows 10 and Windows 11 to help you decide which one is right for you.

It’s been more than eight months since Microsoft released its new operating system Windows 11, a redesign and improvement following its most popular software Windows 10. Windows 11 brings a host of new design choices to the user interface, along with multiple additions designed to improve productivity and feel. With the new Windows 11 22H2 update expected to be released in autumn this year, there’s no better time to compare both softwares, to see which will suit your needs best. If you’re looking to purchase a cheap Windows 10 key, Kinguin is running a huge software sale on all Windows related products, including Windows 10, 11 and MS Office.  To help you decide which operating system is best for you, we’ve listed a few key comparisons below.

The first thing you’ll notice about Windows 11 is that it looks markedly different from the older Windows 10. Although most of the key differences are changes to the software itself, Windows 11 has been given a more modern interface; with the introduction of a central taskbar (that can be aligned to the left like the more traditional Windows editions), curved window corners and a more simplistic design across the board.

Windows 10 is slightly more stable than Windows 11 as a result of the years’ of updates and patches Microsoft has released. A majority of the bugs on Windows 11 are minor and are being constantly addressed by the monthly patch updates Microsoft releases. This stability also applies to external software; there are sometimes compatibility issues with major Windows releases (these same issues were present when Windows 10 released back in 2015) which is to be expected with a brand new OS. We anticipate that Windows 11 software compatibility and stability will improve over time, however, as of now Windows 10 wins this one.

Windows 11 has stricter hardware requirements for installation compared to Windows 10. These include having TPM v2.0 enabled on your device and having at least an 8th Gen Intel or a Zen 2 AMD CPU that supports the secure boot option. Most devices on the market today will typically have these features, but if you’re looking at upgrading an old laptop or tower computer, then you may need to check to see if the hardware you have supports Windows 11.

Windows 11 has made it much easier to manage your tabs and apps through a newly designed multitasking feature, which includes better support for setups with multiple monitors. Windows will remember the location of your applications on that external screen, and will save them in that state if you were to disconnect from it. There is also a newly improved task view that supports the user to save different versions of their virtual desktops.

With Windows 10, the tablet mode simply made your PC compatible with touchscreen devices, but it didn’t change the UI to be more friendly for touch screens. With Windows 11, when enabled, tablet mode adjusts the UI to make it more suitable for a touch screen; in a similar fashion to traditional tablets like the iPad. Tablet mode now also allows you to use gestures on the touch screen for opening and closing active windows, as well as allowing users to switch between virtual desktops.

As previously highlighted, Windows 11 insists users must have TPM 2.0 enabled and a CPU that supports secure boot. These enhance the security on your device and, with the push towards password-less security, Windows 11 takes the step towards security becoming a more passive factor rather than having to type in passwords or PINs.

When looking at gaming performance, both versions of Windows are similar; with Windows 10 performing slightly higher on lower spec gaming rigs whereas Windows 11 can squeeze out a few more frames-per-second on a higher-specced PC. However, the difference between the two is minimal and the in-built Windows Game Mode has the same capabilities regardless of the version of OS. But, Windows 11 might take a step forward in the future and become a better gaming OS compared to Windows 10. This is due to the new API known as DirectStorage, where loading times will be cut dramatically as it will shift data decompression from the CPU to the GPU. It will however, take time for developers to utilize this API, so there will be no major benefits until the near future.

Windows 10 will continue to be supported until 2025, giving Windows 11 plenty of time for further updates and improvements. It’s up to the user to decide which one they prefer; both OS’ have unique benefits to them. Upgrading from Windows 10 to Windows 11 is 100% free, and Microsoft has not announced an end date for that upgrade.

If you’re looking to purchase activation keys for your new devices, Kinguin is one of the most well known global marketplaces for software, with 98% of Window’s purchases on Kinguin made by customers visiting the website specifically for Windows keys. There is currently a Software Competition powered by NextKeys.io running until 26 June 2022, where you can purchase Windows keys for cheap prices, along with a chance to win a Windows 10 Home or Professional key.