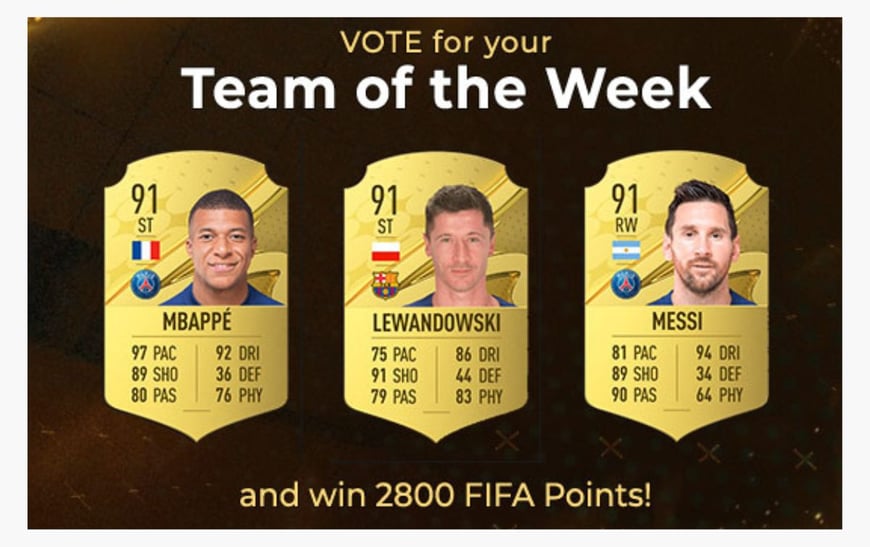 The online FUT mode has been an indispensable part of every edition of the FIFA series since 2008. Due to the World Cup taking place in the winter, this year's FUT season is extremely exciting! Which football players will receive FIFA 23's Team of the Week cards? Explore our TOTW predictions and get your squad ready for the new packs.

First of all, it's worth noting that FIFA 23 will be the last part of the series released under this name. Next year, due to the sale of the licence, the game known to every football fan will already be available as EA Sports FC. For this reason, Electronic Arts wants this year's edition to be remembered particularly well. We can therefore expect a number of exciting events, including the absolute classic, TOTW FIFA 23.

Among the biggest changes introduced in the new version of the game, it is worth mentioning cross-play between PC and consoles from different manufacturers. This is a solution that was already tested in one of the FIFA 22 updates, but will now be available from the very beginning of the season. It is worth to mention that FIFA 23 has one shared transfer market in FIFA Ultimate Team for Xbox One, Xbox Series X|S, PlayStation 4, PlayStation 5 and Stadia. The only independent/individual FUT markets are for PC and Switch players.

Team of The Week 5 predictions

The online FUT mode has been an indispensable part of every edition of the FIFA series since 2008. Due to the World Cup taking place in the winter, this year's FUT season is extremely exciting! Which football players will receive FIFA 23's Team of the Week cards? Explore our TOTW predictions and get your squad ready for the new packs.

Fifth predictions for the Team of the Week in FIFA 23!

You cannot miss  FIFA 23's weekly Team Of The Week event.FIFA 23 Team Of The Week selections are based on the performance of players in real football matches throughout the weekend. Players selected to TOTW receive upgraded versions of their in-game cards.

Vote for your TOTW here, grab a bonus 14% discount and take a chance at winning FUT Points!

Make your predictions for the next TOTW!

What will the next FIFA 23 team of the week look like? Who has the best chance for a special card? These are questions that regularly spark the imagination of many fans of football and the game series from EA Sports. Get ready for new packages and make your TOTW predictions with us! You can find the voting page at the link below.

The 2022 FIFA World Cup, which will be held in Qatar, will be held for the first time ever in the autumn-winter season - November/December to be exact. This also means that, uniquely, they will be played after the release of the new edition of FIFA. For this reason, players can count on another novelty: a special World Cup Mode.

Players will not only have the chance to win unique TOTW FIFA 23 cards during the World Cup, but also compete for the World Cup in virtual form. Both the 2022 Men's World Cup in Qatar and the 2023 Women's World Cup in Australia and New Zealand will be available in the game as free updates. We can expect the availability of all the teams and players present at the championships, as well as the ability to build your own team made up of your favorite players performing at the World Cup.

In addition to the FUT add-on that most players are waiting for, online and single-player tournaments are also likely to appear. It will be possible to compete in them with any of the 32 countries participating in the championship in Qatar. Polish fans will certainly be most interested in Group C, which includes Polish national team along with Argentina, Saudi Arabia and Mexico. However, there is no shortage of exciting clashes in other groups - this year is sure to bring a unique football experience.

FIFA 23 is available on PC, PlayStation 4, PlayStation 5, Xbox One, Xbox Series X and the Legacy Edition on Nintendo Switch, check out our deals and buy FIFA 23 cheaper: