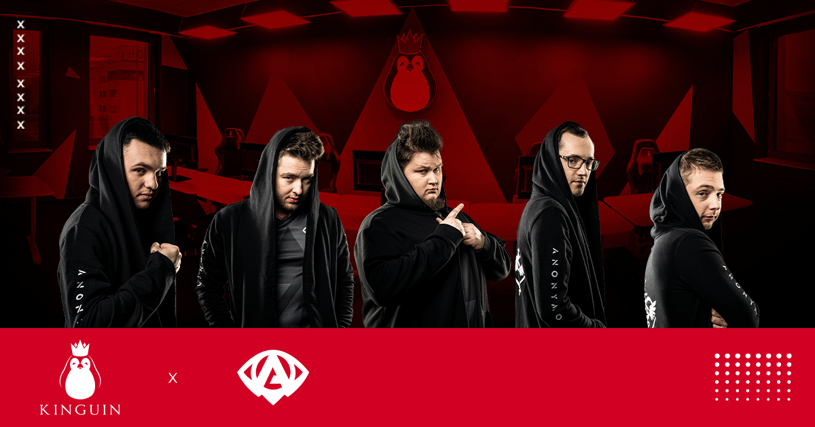 KINGUIN is excited to announce becoming the major sponsor for Anonymo, a Polish professional esports organisation that competes in Counter-Strike:Global Offensive (CS:GO). It means that Kinguin is now the lead sponsor of two top-tier esports teams from Poland, including League of Legends' devils.one.

As part of the partnership, Kinguin will also provide Anonymo with access to the Kinguin Esports Performance Center (EPC). It is the most professional and advanced esports training facility in Europe, with Anonymo receiving its own dedicated, branded top-class training room. The EPC which is based in Warsaw, is the first professional training facility for esports organisations in Europe and provides teams with access to training and analyst rooms, psychologists and physiotherapists, professional chefs and gym facilities. From the beginning of last year EPC was used by world-leading esports organizations, such as OG, FaZe Clan, Team Vitality, MiBR, Evil Geniuses, 100 Thieves, Furia and many others.

Anonymo CEO, Mateusz Kowalczyk said: We’re really excited to name Kinguin as our lead sponsor and look forward to collaborating with the organisation on numerous projects in the future. Our ambition, as an organization is to become a mainstream esports organisation that competes on the international stage and the sponsorship with Kinguin will be paramount to helping us achieve that. Having access to the world class training facilities at Kinguin’s Esports Performance Center in Warsaw is also going to help with our progression, at what is currently a pivotal stage of development for the team.

Kinguin has a long history of sponsoring esports organisations and events and was one of the first digital marketplaces to launch a dedicated website where customers could purchase CS:GO skins. Team Kinguin, the organisation's own esports team which launched in 2015, was also regarded as one of the best CS:GO teams in history owing to their international roster of talent.  The team later rebranded as devils.one in 2019 and over the years, both teams have helped numerous professional gamers forge their careers  in CS:GO, DOTA 2 and League of Legends esports.

Meanwhile, newly formed esports organisation Anonymo launched at the start of 2021. It recently unveiled its competitive CS:GO lineup, which consists of legendary Polish CS:GO veteran Janusz “⁠Snax⁠” Pogorzelski, in-game leader Wiktor “⁠mynio⁠” Kruk, as well as Kamil “⁠KEi⁠” Pietkun and Kacper “⁠Kylar⁠” Walukiewicz and Paweł "innocent" Mocek. The team has previously competed in local Polish and European tournaments, including the ESL Polish Championships and the Dreamhack Open January 2021: Europe. The team is now set to compete on the international CS:GO stage later in 2021.

Kinguin CEO and Founder, Viktor Romaniuk Wanli, said, “We’re really happy to unveil our sponsorship of Anonymo, a leading, professional Polish esports organisation. Kinguin has a rich history of sponsoring various esports teams and events - particularly in the CS:GO scene - and we’re delighted to re-enter the CS:GO space and start a completely new chapter through this partnership. It means Kinguin now sponsors two of the biggest esports teams in Poland that compete in two of the biggest esports in the world - CS:GO and League of Legends.”